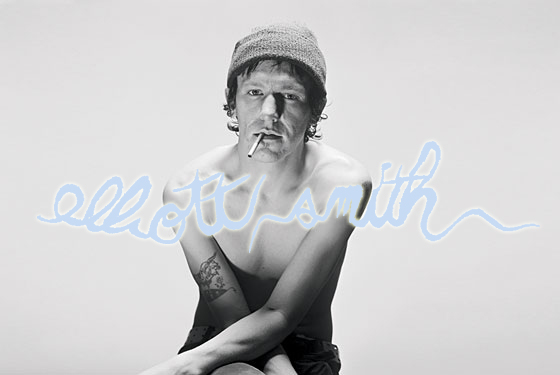 Article by David D. Robbins Jr.
Reissues: “Roman Candle” and “From a Basement On the Hill”

There’s so much emotion devoted to the process of making or listening to great music — but even more-so when an artist dies young. For good reason, Elliott Smith’s fans are as religiously devoted to his music as the fans of Jeff Buckley and Kurt Cobain are to theirs. An album like “Roman Candle”, which Smith recorded in his basement while his girlfriend was trying to sleep, feels so intimate — almost as if the music is being played only for you. Much like a candle, the nine songs on Smith’s first solo record, are meant for private and introspective moments. You can feel Smith’s softness of touch, his elegant sense of melody, the mellow melancholic intensity, his dark sense of humor and his withdrawn nature that still found a need to create and be heard. Many early Smith listeners feel a kinship with other fans for having all fallen in love with the Portland singer-songwriter before his death made his name a little better known. Some may think of that as indie elitism, to stake a first claim to an artist, but there’s something to be said for the bond that forms among fans that know other fans have been invested in the long haul as much as they have. They know the history of the man and the music. They have reveled in every turn of phrase. In short, the music has become inseparable from their lives.

That’s what makes it so touchy when Independent record label Kill Rock Stars announced they were going to re-release Smith’s first, and final, full-length albums: 1994’s “Roman Candle” and 2004’s “From a Basement on the Hill,” which Smith was working on at the time of his death. “Roman Candle” was Smith’s first solo album, made when he was much better known around the Portland area for being the lead singer of the band Heatmiser. Smith recorded the nine songs with a borrowed guitar and a four-track, and was later convinced by his girlfriend to send the finished product to Cavity Search Records. The rest is history. “Roman Candle” is basically Smith’s whispered vocals, acoustic guitar and the occasional harmonica, drum brushes and electric guitar. There’s not one bit of artifice to this raw master work. Listening to the record is a bit like watching a victim bleed out. It’s that honest, with these heartbreaking lyrics about abuse, setting the tone with its sorrowful opening title track:

One of the most remarkable things about some of Smith’s songs is how he carried beautiful melodies and cadences from phrases without the need for rhyme. It makes many of his tracks organic, and open-ended. His verses seem to fade softly, one into the other, without the harsh reminder of the pen that comes with all-to-awkward or easily forces rhymes. It makes some of the end- and internal rhymes prettier for it. The second track, the Beatlesesque “Condor Ave.”, is a melodic wonder, showcasing Smith’s talent for storytelling, mood creation, honesty, and lyric writing:

“She took the Oldsmobile out past Condor Ave. / And she locked the car and slipped past, / Into rhythmic quietude. / Lights burning, / Voice dry and hoarse. / I threw the screen door like a bastard back and forth. / The chimes fell over each other, / I fell onto my knees. / The sound of the car driving off made me feel diseased / Sick shouting like you hear at the fairground. / Now I’m picking up, to put away, / Anything of yours that’s still around.”

Smith was working on his sixth and last album, “From a Basement on the Hill”, while battling depression, alcohol abuse and heroin addiction. The 15-song record was released posthumously, after the singer supposedly died from self-inflected stab wounds in 2003. It was originally meant to be a double disc, but due to the circumstances and much of the work being unfinished, was cut down from over 30 songs.

Understandably, there’s always issues with posthumous work — with fans and friends of the musician asking the question, “Is this really what the artist intended?” In the case of “From a Basement on the Hill” — the answer is a complicated yes and no. Obviously, Smith didn’t get a say in remixing, song selection or track sequencing. Track eight, “Ostrich and Chirping”, is really an instrumental written by producer David McConnell — inexplicably included on the record. McConnell said three of the songs were finished by his and Smith’s standard. Perhaps the album isn’t as rough as Smith may have wanted, but there’s a lot of quality and beauty. Smith was transitioning into much bigger, and more textured sounds. The album opener, “Coast to Coast” begins with fuzzed out neo-psychedelic washes of sound before turning into a guitar-driven number. Songs like “Let’s Get Lost” would end up being more akin to “Roman Candle” than the bigger studio albums like “Figure 8” or “XO”. These were the songs of an artist learning to mix his low-key acoustics with the more modern methods of noise, layering and computer mixing.

It’s tracks like “King’s Crossing” (one of Smith’s best songs) — with it’s pretty intro, rolling guitar, and exquisite lyricism that shows where the troubled singer was headed both musically and mentally. In some of the finest lyricism Smith ever wrote, he directly confronts issues of drinking, the sliding feeling of depression, and the task of making music — alluding to the familiar touchstone of “Roman Candle” in the line “frustrated fireworks”:

“The king’s crossing was the main attraction, / Dominoes are falling in a chain reaction. / The scraping subject ruled by fear, / Told me whiskey works better than beer. / The judge is on vinyl, decisions are final. / And nobody gets a reprieve … / Frustrated fireworks inside your head / Are going to stand and deliver talk instead / The method acting that pays my bills / Keeps the fat man feeding in Beverly Hills / I got a heavy metal mouth that hurls obscenity / And I get my check from the trash treasury … / It don’t matter because I have no sex life / All I want to do now is inject my ex-wife / I’ve seen the movie / And I know what happens … / This is the place where time reverses / Dead men talk to all the pretty nurses / Instruments shine on a silver tray / Don’t let me get carried away.”

Smith also wrote, in the same song, these sadly prophetic lines:  “I can’t prepare for death any more than I already have / All you can do now is watch the shells / The game looks easy, that’s why it sells.” Certainly, he was in a dark place, doubting himself and the merits of his chosen profession.

Admittedly, some songs on “Roman Candle” do have aspects that could use a mastering (Technically not a re-mastering, because the original was never mastered): The beautiful blemishes (clearly heard guitar chord changes) in “Condor Ave.”; the vocal volume in “No Name #1” and the clicking of the four-track ending the same song. You can also hear the hard scratches of consonants through the microphone. But these are traits that fans have come to love. They’re the memories of the creation. They’re a marking of time. The musician’s birthmark. The fingerprints and brush strokes left visible on a masterpiece. So, it’s no wonder some fans are upset. But they can also live with knowing that the two albums were mastered by those that knew him best. The newly mastered works don’t annul the originals — they’re just another version of a great thing.

Below are two tracks offered for free by Kill Rock Stars records, from the remastered versions of the two albums.

One thought on “ONE IS THE LONELIEST NUMBER | Elliott Smith”